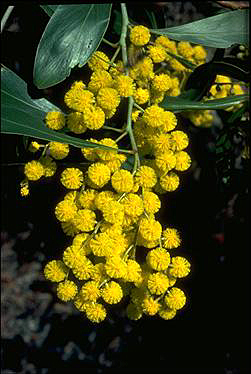 One of the most intriguing aspects of Australia is the flora and fauna. Celebrated pieces of Australia’s heritage, the floral emblems are represented in the flags and symbols of the commonwealth and territories. Identifying the symbols and the areas they represent promotes an appreciation of the diversity of the Land Down Under, and is a reminder of the beauty of the continent. The wattle is a small shrub, and is a favourite garden plant with easy propagating and frost resistance. A beautiful plant that bears yellow fluffy flower heads and gives off a sweet scent, it is found in the temperate climates of southern Australia. Another recent addition to the floral emblems is the Australian Capital Territory. In 1982, the Royal Bluebell (Wahlenbergia gloriosa) was unanimously accepted as the symbol of the territory. Voted on due to the native occurrence of the flower in the Capital Territory, this violet flower seems to nod its blue petals on the breeze of the land. Tall stems that can be grown in hanging planters, as ground cover or decorative plantings, the hearty plants can grow in semi-shady or sunny conditions. With the naming of the floral emblem, the Australian Capital Territory was finally on equal footing with the other states and territories and can proudly display its symbol on flags, postage stamps and other materials. Despite being rejected as the national floral emblem, the Waratah (Telopea speciosissima) has a place of honor as the symbol of New South Wales. Championed by R.T. Baker, this native Australian plant is easily recognized by its large crimson flowers. Found along the southern coastline, the Waratah is a lovely addition to a well-drained garden. A bit temperamental, the conditions in the garden must be just right – it doesn’t like winter, or wet soil – but when in the right place, can be a source of delight. The plants can be propagated by cuttings with ease. Seedlings can be prone to fungal disease and need careful attention to be successful. The flowers are spectacular in cut arrangements. A favourite of artists, the Waratah can be seen in a variety of stylistic designs throughout Australia. Sturt’s Desert Rose (Gossypium sturtianum) was chosen as the floral emblem of the Northern Territory in 1961 by the Commonwealth. When the Northern Territory was granted self-governance in 1978, the flower took on a more symbolic meaning, and began to represent the territory. These drought resistant flowers are related to the cotton genus, and can grow with limited rainfall and dry soil. Predominantly found throughout the central part of Australia, the compact shrub blooms mauve flowers with a red centre. In the wild, it prefers to grow in rocky, stony soil and can be seen in dry creek beds. As a shrub, it does not grow well as a container plant, and the flowers are not suitable for cut arrangements. It will, however, lend a beautiful splash of colour to its dark green leaves, dotting your landscape with flashes of red. A stylized version of Sturt’s Desert Rose can be seen in the territorial flag – a flower with seven petals (instead of the usual five) represents the Australian territories. After a territorial wide vote, the Cooktown Orchid (Dendrobium phalaenopsis) was selected as the floral emblem of Queensland in 1959. It met the criteria of the search committee – it was native to the area, was distinctive and beautiful. These large plants occur in northern Queensland, and are about 80 cm tall. They occur naturally in Queensland, but can be grown attached to a base – the trunk of a tree, for example. Largely sought after as part of the orchid family, they have become over-harvested in some parts of Australia. Prized for their hearty disposition, they can survive when growing on a cork base, and will remain beautiful for many weeks as part of a cut arrangement. Flowers are typically deep to pale lilac, and on occasion white. Found in the south-eastern part of Australia in Tasmania, the Tasmanian Blue Gum (Eucalyptus globulus) is a tall tree with creamy flowers. The leaves, when newly developed, are covered with a blue-grey waxy bloom which was the source of its name. Because of its large size, the Blue Gum is not suitable for growing in a home garden, but is perfect for public areas like parks and gardens. The flowers are typically high in the tree, and so are not used for any decoration although the leaves are often included in greenery. The straight trees provide a source of timber as well. Once considered to possess magical powers because it seemed to rid the area of mosquitoes, it has been denounced as superstition. The trees are effective at removing water from swampy area, eliminating a breeding area for mosquitoes, thus the lessening number. Interestingly, the tree is seldom used as a symbol of Tasmania. It is not well-known among the natives and so rarely is seen in artistic form. Another discovery by Captain Charles Sturt, Sturt’s Desert Pea (Swainsona Formosa) was named South Australia’s floral emblem in 1961. This creeping vine, known to grow only in Australia, is found in all the mainland states except for Victoria. The nine centimetre flowers can range in colour from white to pink but are typically scarlet with a black base. A protected plant, it is illegal to collect on Crown land, and may not be harvested on private property without the written consent of the owner. Distinctive in shape and colour, the flower is used on many types of media. Extremely hardy, the plant can withstand heavy rains, light frosts and extreme temperature changes. As a vine, it is not typically considered suitable for planters but can be used as groundcover or as splashes of colour in lawns. Once the plant is established, it does not need a lot of care, but must be protected from snails. The slender Common Heath (Epacris impressa) shrub was announced as the floral emblem of Victoria in 1958. Growing about a meter in height, the leaves cluster around tall clusters of flowers. The flowers may be seen in colours including crimson, pink, white and scarlet, but the most common one is the pink. Individual plants tend to die off easily, so it is recommended to plant a series of the Common Heath, in a hedge for example, to ensure coverage. Found in the coastal heathlands, it is widespread through the coastal and desert regions. Easy to care for seedlings can make this an easy beginner plant for someone who is just starting out in gardening. The flowers are long-lasting making this a favourite in cut arrangements. Moderately cool weather seems to have no effect on the flowers, helping the flower to find use in Christmas arrangements and lovely indoor plants. Restricted to the south-west side of Australia, the Red and Green Kangaroo Paw (Anigozanthos manglesii) is a low shrub that grows from and underground stem. The unique flower resembles a paw stretching to the sky, and is covered with wooly hairs. The Red and Green Kangaroo is a protected species and may not be collected without a license. The base of the flower is a bright red which switches to green, and then splits open to show the pale smooth centre. Found in a variety of colours (green and orange, yellow and red, for example) the red and green are the most common. The flowers last a long time and can be used in cut arrangements for a whimsical touch.

The floral emblems of Australia reflect more than just beautiful plants. They represent a continent rich with diversity. From the temperamental orchids to the Sturt Desert Pea, each territory’s flower shows off an important piece of information about the area. Indicative of the area it represents, the flowers show a land that is determined to succeed in spite of adversity and regardless of location. Beautiful and strong at the same time, they remind the Australians of the tenacity it takes to survive in a desert climate, and how to develop beauty in spite of rocky surroundings. It is reminiscent of the humble beginnings of the nation and is a lesson in itself to consider how the Australian people have long regarded their plants.